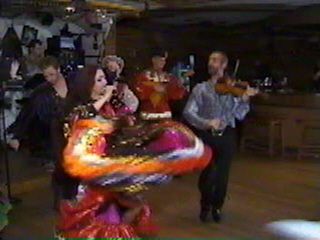 To order DVD please use PayPal link below. The price is $30 US dollars including US first class or airmail shipping anywhere in the world. DVD is usually shipped withing 48 hours of your payment. This video is offered only from Barynya merchandise website. There is no other place you can purchase this video.

RELATED CDS AND DVDS FOR SALE

Russian Gypsy Music Balalaika Albums by Bibs Ekkel. Born in 1946 in England of mixed Polish-English background, Bibs Ekkel is both musician and linguist. His career as one of very few outstanding professional balalaika players outside Russia has brought him much recognition worldwide, including in the balalaika's Motherland, where he has performed on radio and TV as well as at Moscow's prestigious "Hall of Columns" and "Tchaikovsky Hall"... more info, music, order CDs

MASSENKOFF RUSSIAN FOLK FESTIVAL CD Nikolai Massenkoff, in his voice and personality, has been compared by critics to the prominent singers in the classical world as well as the pops, from Fyodor Chaliapin to Frank Sinatra. 11 popular Russian folk songs including "Accordionist", "Dark Eyes", "Kalinka", "Karobushka", "Katusha" and "Volga Boatmen", "Moscow Nights", "Accordionist", "Two Guitars" and "Along Petersburg"... MP3 samples, order

The Balalaika Russe - "Heart On The Snow" Album Since its inception in the early 1970's, the BALALAIKA RUSSE has grown in popularity and proficiency and is now considered the finest ensemble of its kind in the USA. This colorful sextet has performed from Washington to Maine and Europe, at such venues as society balls and affairs, at local church halls, outdoor concerts and festivals, weddings, club dates, and on the concert stage.... MP3 samples, order

Russian Gypsy singer Zhenia Shevchenko DVD "Zhenya! The Singing Legend". Jenia Shewtchencko's 2006 interviews, video from 2005 and 2006 performances with New York based Russian dance and music ensemble "Barynya". Shevchenko Zhenya (Eugenia Pavlovna) - performer of Russian and Gypsy (Roma) songs and romances from New York City. She was born in Kiev in 1927, in 1942 immigrated with her family to Prague. She has a unique voice - deep contralto... more info, order

Don Cossacks State Academic Song and Dance Ensemble from Rostov Compact Disk 1. The Artistic Director is the National Artist of Russia, Professor Anatoly Kvasov. It is the Don folk song and dance traditions that form the basis of the ensemble's artistic work. The program of the chorus includes small cycles of songs linked by the same thematic material, girlands of songs of military and historical songs and bylinas (epic songs). The Ensemble had a magnificent success on the sold out concerts in Europe, Azia, America and Africa... MP3 samples, order